The Chinese ambassador to the US delivered video remarks on Friday at the first graduation ceremony of the Juilliard School of Tianjin Conservatory of Music, which is also the first Class of undergraduates from the university. 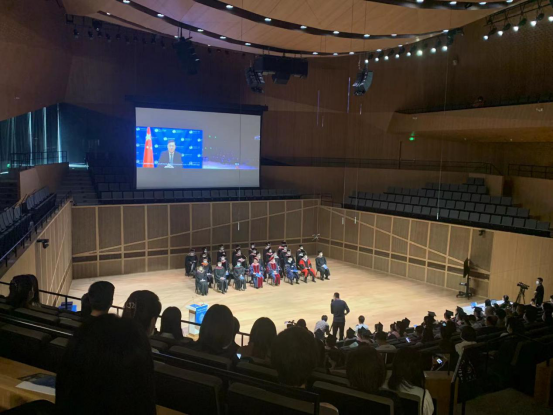 He commended that the Sino-US joint colleges and universities are valuable attempts at the educational cooperation and communication between China and the US, encouraging students to promote international people-to-people exchanges and become ambassadors of friendship.

The Juilliard Graduate School, Tianjin Conservatory of Music, is the first and only overseas branch of The Juilliard School in New York and was established in November 2015. It is the first art school in China to grant the US master’s degree. Located in the Yujiapu Free Trade Zone in Tianjin, China, the Juilliard School has become a cultural center for performance, practice, research, interactive exhibitions and public service.

In his online speech at the graduation ceremony of Juilliard Graduate School, Tianjin Conservatory of Music, Qin Gang pointed out that the school is a Sino-US cooperative institution containing high quality, which has cultivated high-level international musical and artistic talents and made a fruitful contribution to promoting mutual appreciation of the arts and humanistic exchanges between the two countries.

Qin expressed his hope that, standing at the starting point of graduation, facing a world that is still complex and uncertain, the students would remain independent and determined and strive to become “global artists” with high artistic standards and a sense of social responsibility.

It is the first art school in China to grant a US master’s degree. The first recipients are 33 graduates who come from eight countries including China, the United States, South Korea, and Uzbekistan.

The school has benefited from strong support from Tianjin and Binhai New Area’s government, relevant departments and cooperative partners.