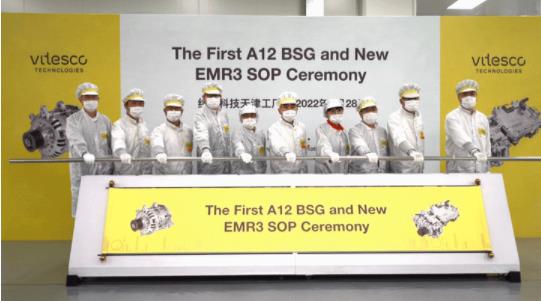 Recently, the Tianjin Plant of Vitesco Technologies held the First A12 BSG (48V Belt-driven Starter Generator) and New EMR3 SOP (High Voltage Axle Drive-EMR3) Ceremony, marking the two products are in mass production. Compared with the claw pole BSG solution on the market, the permanent magnet synchronous motor from Vitesco Technologies is able to provide higher energy density, higher electricity conversion efficiency and lower mechanical friction loss. Being mass-produced in the Tianjin Plant in 2019, EMR3 has been applied to more than 20 new energy vehicles of over 6 brands.