Tianjin, the largest costal city in North China, is the birthplace of China’s modern industry. The city is favored by foreign investors for her strong industrial foundation, gifted location and world-class supporting services. It is not only a distribution center for global goods, but also a gathering place for foreign capitals and enterprises including a galaxy of Global 500 companies and industrial leaders. Tianjin is now home to several influential industrial clusters. 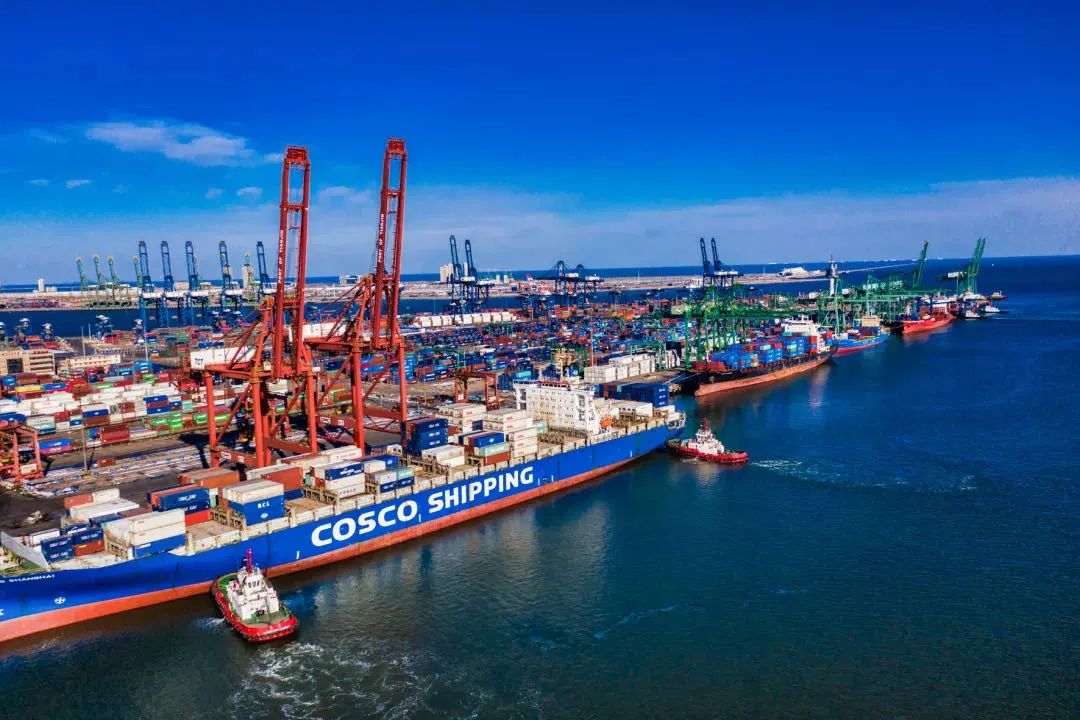 As the contributor of one third of Tianjin’s tax revenue, nearly a half of import and export value and one third of gross industrial output value, foreign enterprises have become important engines for Tianjin’s economic growth. As a major destination for foreign capital in Tianjin, TEDA is leading its peers in the utilization of foreign investment. In 2021, the actually utilized foreign capital reached 1.469 billion US dollars in TEDA, about one third of Tianjin’s total. Projects including SEW intelligent manufacturing base, PPG global coatings center and OTIS intelligent elevator testing center speed up their investment; projects such as Vitesco Technologies R&D center, NO.2 plant of Denso Electronics and Nouryon world-class peroxide base are completed or in operation; Mars and Nestle Pet care projects are under construction. New projects keep coming into TEDA and businesses continue to expand their operation. These foreign players have been deeply involved in the robust growth of TEDA; their growing strength also manifests TEDA’s prosperity and openness. 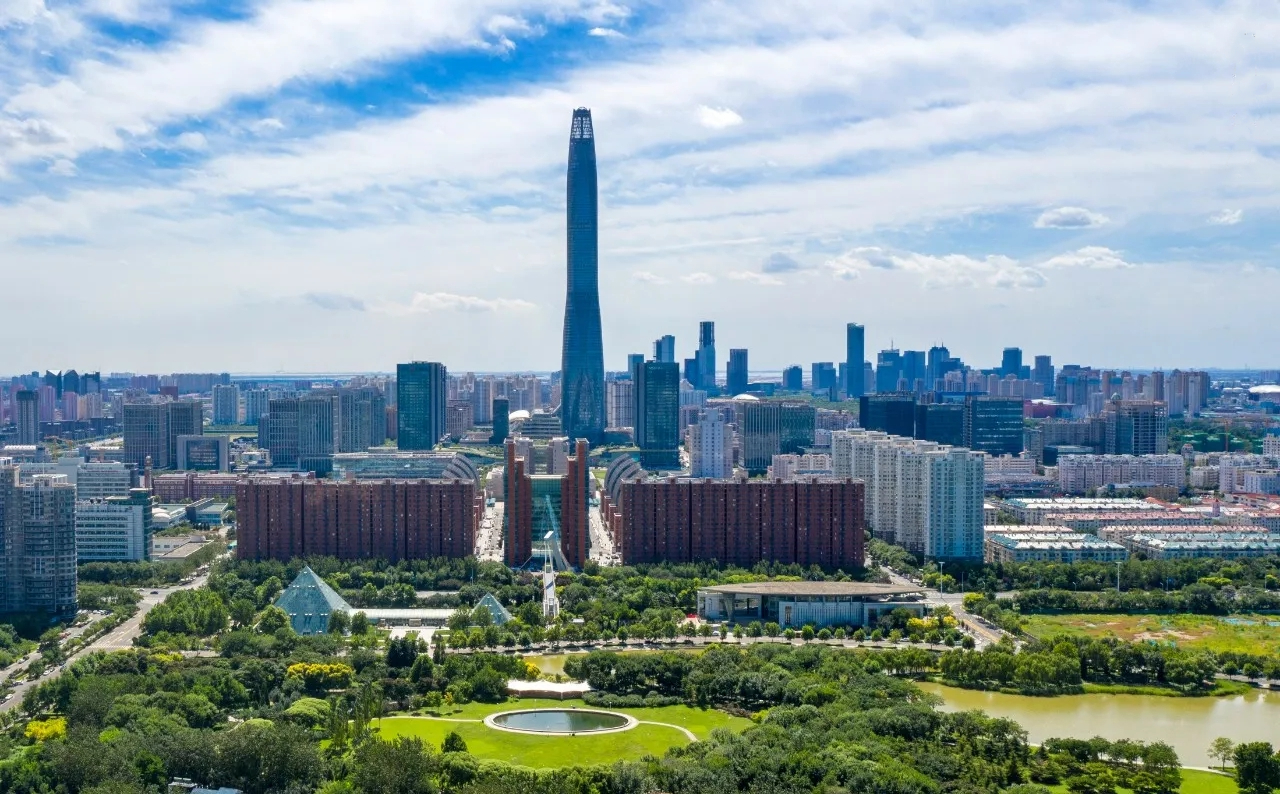 As early as the 1980s, foreign capital started to join the young TEDA, grew with it and became an important driver of Tianjin’s economic growth.

Foreign Companies all over the Pillar Industries

By the end of 2021, TEDA has accumulatively introduced 6,362 foreign-funded projects from 97 countries and regions, including 523 projects by 117 Fortune 500 companies, covering almost all the pillar industries in TEDA. In the automotive sector, carmakers such as FAW-Toyota and FAW-Volkswagen, as well as 200 auto parts providers including Vitesco Technologies and Kumbo Tire form a fully-fledged auto ecosystem; in the high-end equipment sector, SEW and OTIS grow rapidly; SAMSUNG, NXP and Laird make new breakthroughs consecutively in integrated circuits, electronic components and chips, promoting the formation of a world-class next-gen IT cluster; for chemical new materials, SSTPC and Shell root and grow steadily in TEDA; as for pharmaceuticals and healthcare, Novo Nordisk, GSK and Nestle increase their capital and expand production for years. Their growth pushes forward the rapid development of TEDA’s industries. In 2021, the output value of electronics & IT and auto equipment exceeded 320 billion yuan, and investment in key industries such as electronics, pharmaceuticals and machinery manufacturing increased by more than 30%. 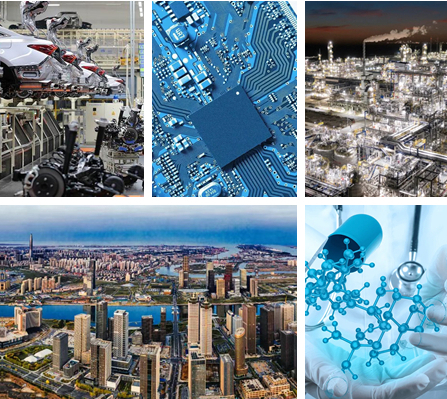 As a magnet for high-end technological industries, TEDA attracts multinationals again with the chance for headquarters economy. They are looking forward to the access to broader markets in China and even the Asia-Pacific region with TEDA’s competitiveness in industries and location. So far, TEDA is home to 10 quasi-headquarters of multinationals recognized by Tianjin Commission of Commerce, accounting for almost half of that in Tianjin. Set up by enterprises from Europe, the US and Japan, these quasi-headquarters inject new vitality to the regional economy in such fields as biomedicine, next-gen IT and auto & high-end equipment, and push TEDA to integrate into the global market.

A Cluster for Global Innovation and R&D Centers

Foreign companies expand investment, develop new businesses and increase R&D spending in TEDA under the headquarters economy. TEDA now rises from an initial production base to a hub of global innovation resources. FAW-Toyota, Honeywell, Continental AG and PPG set up their R&D centers in TEDA; Nestle builds a quality assurance center of the Asia-Pacific region; OTIS establishes a testing center. The innovation capital, technology and talent they bring to TEDA enable the region to embrace global-standard innovation resources and welcome faster economic growth.

The rapid growth of enterprises is inseparable from strong industrial foundation and superb business environment in TEDA. TEDA continues to optimize business environment and provide more efficient government services to better serve its enterprises. Supported by such strategies as the Belt and Road Initiative, the Coordinated Development of Beijing-Tianjin-Hebei Region and China (Tianjin) Pilot Free Trade Zone, foreign companies witness unprecedented opportunities and better performance in TEDA with stronger presence and more exports to the world.

Volkswagen: Major Production Base of Cars and Auto Parts

In June 2018, FAW-Volkswagen North China Base was put into production in TEDA. With Tayron and Audi Q3 as its main products, the base reformed and upgraded its production, quality assurance and management, and brought the domestic car production system into a new level. 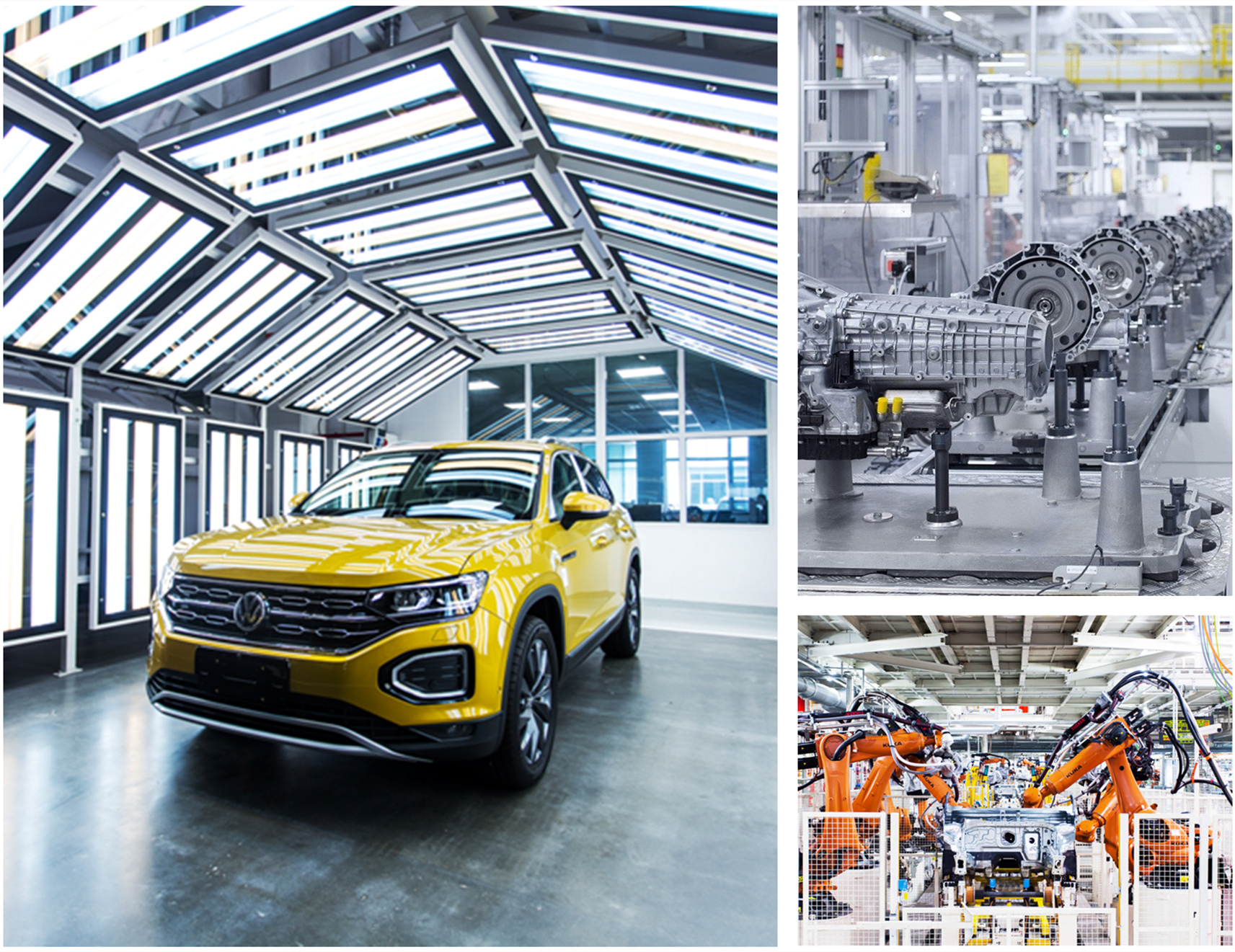 NXP: Tech Innovation on the Way

As a world-leading semiconductor provider, NXP has two branches in TEDA. The company is on a fast track of growth thanks to the sound industrial ecosystem and business environment of TEDA. At present, NXP Semiconductor is one of the leading IC package test companies in terms of size and output value. NXP Qiangxin is a core R&D center of NXP in China, and also the first IC design company in Tianjin.

In May 2021, NXP AI Application Innovation Center was launched. NXP IC Testing Center was completed in 2022. In the meantime, it brought the new-gen AI IoTs and auto electronic chip project to Tianda Science Park. The project introduces more sophisticated AI IoTs, auto electronic products and localization design to TEDA, filling in the gap of high-end design.

In September 1995, the Tianjin plant of Novo Nordisk broke ground, taking a solid step in its blueprint in TEDA. During the past 27 years, the biopharmaceutical giant has made eight reinvestment, introduced new production lines and digital solutions. Nowadays, the Tianjin plant has emerged as a global strategic production base of the group, and its only supplier of durable insulin injection equipment in the world and the largest insulin preparation and filling production base. The company’s expansion also boosted the industrial upstream and downstream. So far, more than 70% providers of Novo Nordisk come from the Beijing-Tianjin-Hebei region, a great booster to the coordinated development of regional economy.

As a national-level demonstration base for the neo-industrialization of petrochemical industry, TEDA attracts first-class petrochemical, new material and new energy enterprises at home and abroad to settle down and expand their investment here. Sinopec Sabic Tianjin Petrochemical Co., Ltd. (abbreviated as SSTPC) is a mega petrochemical enterprise jointly invested by SINOPEC and SABIC. The company has nine sets of world-class facilities such as 1.3 million-ton/year ethylene production line. These facilities, with advanced process technology, produce a portfolio of chemical products. The Park is an important step for SSTPC to expand production in TEDA and a crucial industrial project for Tianjin to realize the coordinated development of Beijing-Tianjin-Hebei region. With a total investment of about 10.7 billion yuan, the project aims to produce 260,000 tons of polycarbonate per year. After completion, it will boost the growth and upgrading of petrochemical industry in the Beijing-Tianjin-Hebei region. 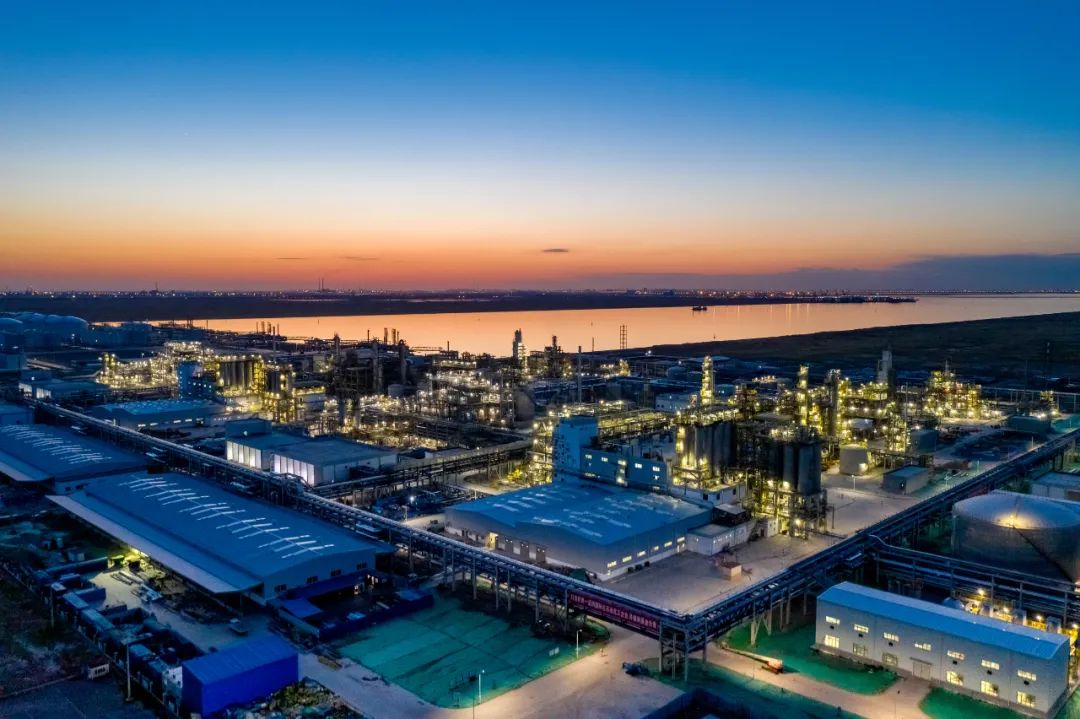 PPG is transforming itself from a production base to an R&D center. So far, the PPG Coatings Global R&D Center under construction is the first global R&D center of PPG except the one in the US, with the investment of 550 million yuan. The center will be completed by the end of this year.

With operations beginning in 1994, PPG TEDA plant, its first plant in China, has grown into the group’s largest coating production base. In 2018, PPG Coatings Global R&D Center settled down in TEDA. “ The service concept of TEDA is wonderful. Enterprises are their first priority. The business environment is favorable for business growth. That’s why we choose to get rooted in TEDA,” said Yan Caiming, general manager of PPG Asia Pacific. More than 100 doctors and 200 senior researchers will join PPG to make its brain stronger.

OTIS: Serving the World from TEDA

OTIS, an international giant of elevators and escalators, never stops her step in TEDA. It has invested many companies in TEDA since 1998. In May 2020, the registered capital of Otis Elevator (China) Co., Ltd. increased to 1 billion yuan from 298 million yuan. In September 2021, OTIS landed its first intelligent elevator testing center, Zhong Ao Intelligence Technological Development Co., Ltd., in TEDA.

The elevators and traction machines made by OTIS TEDA plant are widely used in famous architectures worldwide every year. The elevators installed in the Shanghai Oriental Pearl TV Tower, the Guangzhou TV Tower, the Tianjin CTF Finance Centre and the Shanghai World Financial Center are all manufactured by the OTIS TEDA plant. So do the elevator traction machines of Empire State Building in the US.

Many other foreign-funded enterprises in different industries joined TEDA from all over the world to build their world factories and explore new business. From manufacturing to R&D and innovation, from single factory to headquarters, they root themselves in TEDA and grow together with the city. They become part of TEDA’s story by promoting the upgrading of regional industries and boosting economy. This is why TEDA, a world-class neo-industrial city, is so appealing to investors.